Nothing dramatic here, just a whimsical joke I came across on snopes.com.

The British Government’s policy of socialized medicine has recently been broadened to include a service called “Proxy Fathers”. Under the government plan, any married woman who is unable to become pregnant through the first five years of her marriage may request the service of a proxy father — a government employee who attempts to solve the couple’s problem by impregnating the wife.

The Smiths, a young couple, have no children and a proxy father is due to arrive. Leaving for work, Mr. Smith says, “I’m off. The government man should be here soon.” Moments later a door-to-door baby photographer rings the bell.

Salesman: “Good morning, madam. You don’t know me, but I’ve come to…”

Mrs. Smith: (Interrupting) “No need to explain, I’ve been expecting you.”

I’ve made a specialty of babies, specially twins.”

Mrs. Smith: “That’s what my husband and I had hoped. Please come in and have a seat.”

Salesman: (Sitting) “Then you don’t need to be sold on the idea?”

Mrs. Smith: “Don’t concern yourself. My husband and I both agree this is the right thing to do.”

Salesman: “Well, perhaps we should get down to it?”

Mrs. Smith: (Blushing) “Just where do we start?”

Salesman: “Leave everything to me. I usually try two in the bathtub, one on the couch and perhaps a couple on the bed. Sometimes the living room floor allows the subject to really spread out.”

Mrs. Smith: “Bathtub, living room floor? No wonder it hasn’t worked for Harry and me.”

Salesman: “Well, madam, none of us can guarantee a good one every time, but if we try several locations and I shoot from six or seven angles, I’m sure you’ll be pleased with the results. In fact, my business card says, ‘I aim to please.’“

Mrs. Smith: “Pardon me, but isn’t this a little informal?”

Salesman: “Madam, in my line of work, a man must be at ease and take his time. I’d love to be in and out in five minutes, but you’d be disappointed with that.”

Mrs. Smith: “Don’t I know! Have you had much success at this?”

Salesman: (Opening his briefcase and finding baby pictures) “Just look at this picture. Believe it or not, it was done on top of a bus in downtown London.”

Salesman: “And here are pictures of the prettiest twins in town. They turned out exceptionally well when you consider their mother was so difficult to work with.”

Salesman: “Yes, I’m afraid so. I finally had to take her down to Hyde Park to get the job done right. I’ve never worked under such impossible conditions. People were crowding around four and five deep, pushing to get a good look.”

Salesman: “Yes and for more than three hours, too. The mother got so excited she started bouncing around, squealing and yelling at the crowd. I couldn’t concentrate. I’m afraid I had to ask a couple of men to restrain her. By that time darkness was approaching and I began to rush my shots. When the squirrels began nibbling on my equipment I just packed it all in.”

Mrs. Smith: “You mean they actually chewed on your, er, equipment?”

Salesman: “That’s right, but it’s all in a day’s work. I consider my work a pleasure. I’ve spent years perfecting my patented technique. Now take this baby, I shot this one in the front window of a big department store.”

Salesman: “Oh yes, I have to use a tripod to rest my equipment on. It’s much too heavy and unwieldy for me to hold while I’m shooting. Mrs. Smith?… Mrs. Smith?… My God, she’s fainted!”

The 2nd Amendment (According to Right Wing Gun Nuts)

“An unregulated group of Militant knuckle-dragging Neanderthals being necessary to the Profits of the Gun Industry, the right of everyone and his senile grandmother to buy and keep High-Capacity ammo clips shall not be infringed.”

Dumb Ways To Die — and a Smart Way?

I loved this video by the Australian Metro: a cheerfully ghoulish collection of really stupid ways to pass on.

But the question arose (posed by a Facebook friend) — what’s a “smart” way to die?

My “smart way to die” submission, just off the top of my head:

“Leading a charge up a hill in the face of enemy fire to successfully save your endangered infantry platoon, and then — just as you’re being cheered by your grateful fellow soldiers, plus your adoring mother and stunning girlfriend (who have suddenly arrived on site separately by sheer coincidence, the one bringing fresh-baked brownies, the other to show you her newest Victoria’s Secret lingerie) — tripping and falling into a cleverly-disguised enemy booby-trap consisting of a deep & inescapable vat of bourbon-flavored morphine.”

Part of a speech given by President Harry S. Truman in Minneapolis on behalf of Hubert Humphrey, then running for a seat in the U.S. Senate, on October 13, 1948. President Obama might do well to quote all or part of this in his next debate with Mitt Romney…  (You can read the entire speech here: http://www.presidency.ucsb.edu/ws/?pid=13046 ) 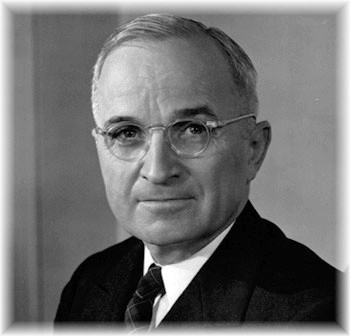 “Today the forces of liberalism face a crisis. The people of the United States must make a choice between two ways of living—a decision which will affect us the rest of our lives and our children and our grandchildren after us.

On the other side, there is the Wall Street way of life and politics. Trust the leader! Let big business take care of prices and profits! Measure all things by money! That is the philosophy of the masters of the Republican Party.

Well, I have been studying the Republican Party for over 12 years at close hand in the Capital of the United States. And by this time, I have discovered where the Republicans stand on most of the major issues.

Since they won’t tell you themselves, I am going to tell you.

They approve of the American farmer—but they are willing to help him go broke.

They stand four-square for the American home—but not for housing.

They favor a minimum wage—the smaller the minimum the better.

They endorse educational opportunity for all—but they won’t spend money for teachers or for schools.

They think modern medical care and hospitals are fine—for people who can afford them.

They approve of social security benefits—so much so that they took them away from almost a million people.

They favor the admission of displaced persons—but only within shameful racial and religious limitations. [Post-WWII reference]

They consider electric power a great blessing—but only when the private power companies get their rake-off.

They think the American standard of living is a fine thing—so long as it doesn’t spread to all the people.

And they admire the Government of the United States so much that they would like to buy it.

By zinkwriter on August 11, 2012 | Leave a comment
Nothing more needs to be said here…

Pregnancy? You’ve got questions. We have answers.

Q:  Should I have a child after 35?
A:  No, 35 children is quite enough.
Q.  I’m two months’ pregnant now, When will my baby move?
A:  With any luck, right after he or she finishes college.
Q:  What is the most reliable way to determine my baby’s sex?
A:  Childbirth.
Q:  My wife is five months pregnant and she is so moody that it sometimes
borders on irrational.
A:  And, your question is…?
Q:  My childbirth coach says it’s not pain I’ll feel during labor, but “pressure”.
Is she right?
A:  Yes, if your childbirth coach also calls a tornado a “moving air current”.
Q:  When is the best time to get an epidural?
A:  Right after you learn that you’re pregnant.
Q:  Is there any reason I need to be in the delivery room when my wife
is in labor?
A:  Not unless the word “Alimony” means anything to you.
Q:  Is there anything I should avoid while recovering from childbirth?
A:  Yes; pregnancy.

If you can start the day without caffeine,
If you can always be cheerful, ignoring aches and pains,
If you can resist complaining and boring people with your troubles,
If you can eat the same food every day and be grateful for it,
If you can understand when your loved ones are too busy to give you any time,
If you can take criticism and blame without resentment,
If you can conquer tension without medical help,
If you can relax without alcohol,
If you can sleep without the aid of drugs…

… then you are probably the family dog.

The new commander of British Forces in Afghanistan hears that a Scots regiment has a specialized field hospital that’s producing fantastic results with the injured soldiers. He wants to know what is so special about the place, and arranges a tour.

When the General gets to the ward, it’s full of patients with no obvious sign of injury or illness. He’s perplexed, so he walks up to the first bed and greets the soldier there.

The General is confused, so he just smiles and moves on and speaks to the next patient.

“Some hae meat an canna eat,
And some wad eat that want it,
But we hae meat an we can eat,
So let the Lord be thankit.”

Even more confused, the Commander moves on to the next patient, who immediately begins to chant:

Now seriously troubled, the General turns to the accompanying doctor and asks, “Is this a psychiatric ward?”

“No, not at all,” replies the doctor. “This is the Serious Burns unit.”

Maybe this is my last post using the alphabet

By zinkwriter on July 3, 2012 | Leave a comment
A great website, and I can’t resist passing it along.